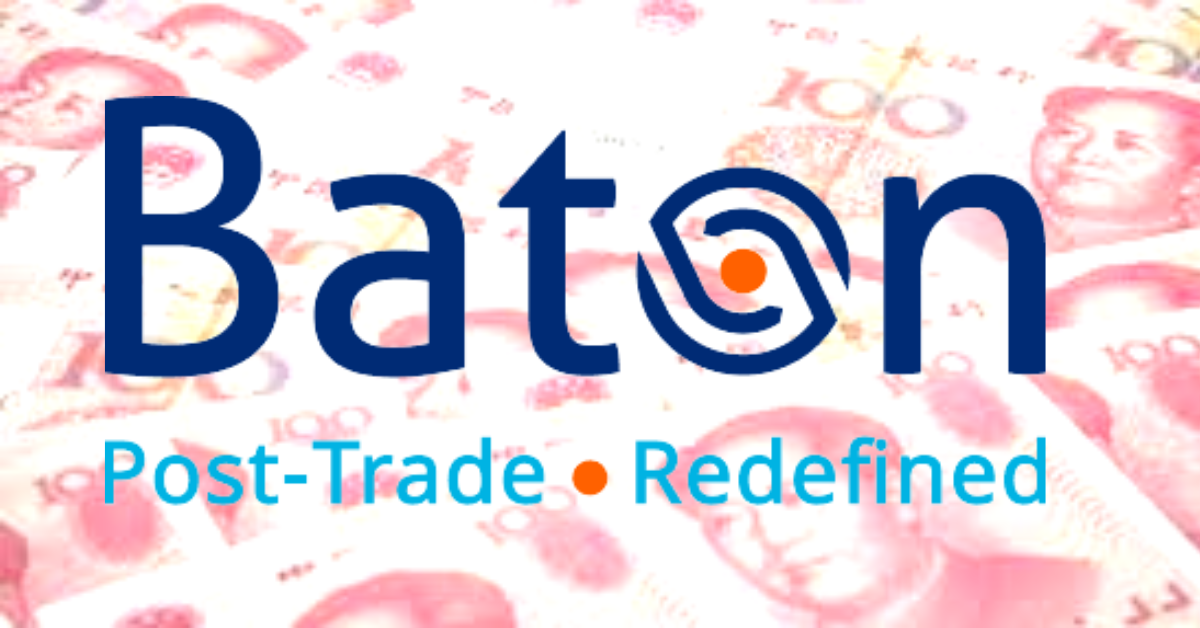 This development provides all wholesale market participants with the ability to eradicate CNH settlement risk, increase market access and open up extensive offshore trading opportunities for Chinese Renminbi. Renminbi is now the 5th most traded currency (as reported by the 2022 BIS Triennial Survey of turnover in OTC FX markets). CLS has been the de facto system for de-risking the FX market, but the pool of currencies does not include currencies such as Renminbi and emerging market currencies. Baton plans to on-board additional non-CLS eligible currencies onto the Core-FX platform over coming months.

In December 2021, Baton announced the world's first interbank riskless settlement outside of CLS.

In achieving riskless settlement for CNH, Baton’s live and highly scalable DLT, is being used in a production environment - breaking new ground by extending the benefits of on-demand riskless settlement to a virtually unlimited range of market participants and currencies. All of the transactional workflow, from trade reconciliation, to netting, to settlement is captured and hashed on Baton’s permissioned distributed ledger. Additionally, the entire process, including the guaranteed movement of funds and settlement finality is established and enforced under the auspices of the Baton Rulebook.

With this expansion, Baton says that it "embarks on the next milestone in its mission to extend access to PvP settlement to all market participants across a broad range of currencies". Using Baton’s Core-FX solution, automatically netted payment obligations can be settled on-demand, multiple times a day, at intervals or exposure threshold times specified by the settling parties, with the entire PvP settlement process completed within five minutes of initiation. This enables the repeated use of liquidity multiple times during the trading day. Baton’s approach opens up new opportunities to market participants to optimise intraday funding, liquidity, credit and risk management.

The addition of CNH extends the pool of currencies the banks have been processing using Baton’s Core-FX platform over the past 11 months to include the first non CLS-eligible currency to be settled by unaffiliated entities. Since the platform’s initial roll out, which commenced with settlement between affiliated entities, trillions of dollars of FX transactions have been netted and safely settled via PvP.

Arjun Jayaram, CEO and Founder of Baton Systems, commented, “Today’s announcement marks a historic breakthrough. By deploying operationally resilient solutions, able to seamlessly interoperate with a bank’s existing payment gateways and processes, we have been able to operationalise the benefits of blockchain to deliver a world first by using DLT specifically designed to meet the capital market’s extensive compliance requirements. The addition of CNH demonstrates the ease and speed that PvP access can be extended across currencies, empowering firms to radically reduce settlement risk exposure fast.

Whilst today’s announcement is a remarkable achievement, it is just the beginning.”

Jerome Kemp, President of Baton Systems, also commented, “The growing significance of Chinese renminbi on the international stage can’t be underestimated - it was on one side of 7% of all trades in 2022 making it the 5th most traded currency. These are trades where the market had no choice but to settle with potentially significant counterparty risk exposure. This development changes everything - going forward all counterparties now have the opportunity to settle offshore Yuan on a riskless basis.

"This is just the start. For almost a year our DLT has been trusted by major banks to safely settle USD, GBP, CAD and EUR transactions every single day and work is in progress to onboard additional currencies in coming months that extend well beyond the majors.”

Baton provides riskless settlement for financial institutions who are members of CLS and also significantly those who are not.

Founded in 2016 by Silicon Valley technologists and capital market specialists, Baton Systems’ technology is now used by several of the world’s largest banks and has facilitated the settlement of more than $10.3 trillion of cash and securities to date. Baton provides riskless settlement for financial institutions who are members of CLS and also (significantly) those who are not.